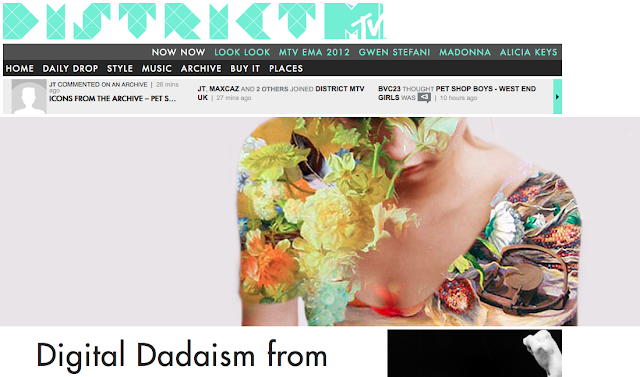 Using Tumblr and Photoshop as his version of a colour palette and paint brush, Matt Wisniewski is something of a 21st century-style Dadaist, minus the anarchy. Desolate winter forests stretch as vast landscapes across the face of black and white portraits, whilst side profiles become fantastically distorted through swirls of breaking waves. Things that should not fit together, strangely and beautifully do in the work of the Brooklyn-based artist.

“I don’t care at all about a blend of human and nature. I just play around with combining things and it just so happens that a head provides a nice discrete canvas. I use a lot of painting, drawings, really whatever I can find,” Wisniewski is quick to admit however. It seems then, that behind his complex imagery, there lies a more instinctual, subconscious and ultimately emotional way of working. An interesting anecdote for those that argue the ‘coldness’ of digital artwork is incomparable to the physical medium of canvas and paint. “Realistically, I don’t see any reason why future tools couldn’t match the feel of their analog counterparts. For collage, digital tools open up a lot of possibilities that just can’t be accomplished with traditional cut and paste methods,” Wisniewski says.

Having used Photoshop since his early teens, the Philadelphia-native reflects on his work as becoming increasingly refined, but not without a price. “From experience I tend to experiment less; there is sort of a downside there from my perspective. Previously it would take forever and it would look awful, but it would be fun and I’d have a new idea out there. I still do that sometimes but it’s harder when you know how it’s going to turn out,” the web developer adds.

Having created series’ with titles such as Wreckage, Five Minutes to Live and Cold Embrace, one could read a variety of apocalyptic theories into his work, but the artist himself appears to have a deep and forgiving love for the process of creation. “I’ve done some terrible collages. But it’s out there, and I couldn’t destroy most of it even if I wanted to. Some of my most popular work would have been deleted by now if it was just sitting on my computer,” he explains. Instead, as Wisniewski reflectively says, “Once I’m done working on something, it doesn’t really have anything to do with me anymore. I had my fun, now everyone else gets to have theirs.”